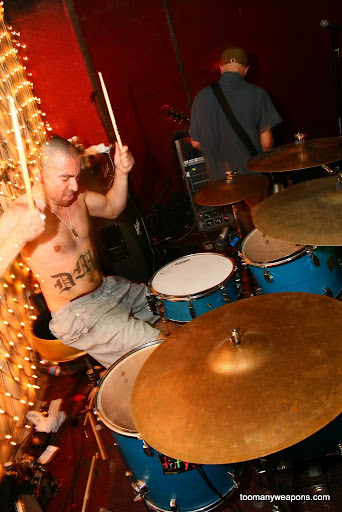 The Cro-Mags are one of my all time favorite bands. My old band used to cover "We Gotta Know" (badly, I'm afraid). Their album "Age of Quarrel" is a hardcore classic. I've now had the opportunity to see them (Cro-Mags jam) twice within the last year. This show was at The Rock Bottom Tattoo Bar in San Antonio. Cro-Mags played Choas in Tejas this year at Emo's in Austin the day before this show, but I opted to see the San Antonio show in a little smaller venue (something about Emo's outside stage has always bothered me - it's not as intimate, I guess). As it turns out, I was on stage during the Cro-Mags set standing not more than 3 feet from Craig Ahead the entire time. It was an honor to take pictures of them. Click here for the photos.

The kids at this show simply WENT OFF for Trash Talk. They sang nearly every word of every verse they played. I've seen them a few times in Austin, but this was by far the best Trash Talk show I have ever seen. Pics here.

This was also my first opportunity to see Your Mistake from Houston. It was a great set. Their drummer quit the band a few days before this show (wtf!?!). So they reached out to their original drummer to fill in for this show. I couldn't tell because they sounded great. Pics here.
Newer Post Older Post Home

Too Many Weapons recent photos